Neuroplasticity and its Implications for Human Potential

Over the course of the next few weeks I will be introducing a multi-part series of posts that discuss how new discoveries in neuroscience and quantum physics influence the implications of personal and social evolution.  Today's topic: Neuroplasticity and how it influences human potential.

What is neuroplasticity, what does it have to do with human potential, and how can it potentially change how we view reality?

Until recently, the prevailing view in neuroscience was that the brain contained all of its neurons at birth and that the number and circuitry of these neurons were set within the first few years of life.  However, in the 1990's neuroscience discovered that the brain continues to generate new neurons throughout life (Long, 1996).  This is called Neurogenesis.  It was also discovered that new and existing neurons undergo structural and functional changes in their circuitry in response to the way we mindfully interact with our environment (Long, 1996).  This is called Neuroplasticity.

Recent studies support the notion that refocusing mental awareness brings about important changes in brain circuitry.  When we intend to see or act differently what we are doing at the micro-cellular level in the brain is that we are choosing one neural circuit over another {or creating a new circuit} (Beaurgard, et al., 2001).

Free will and brain circuitry

The brain wires itself, at the same time as many other automatic brain systems, by having the mind strengthen one neural circuit over another. This is the essence of neuroplasticity.  But how does the mind choose how it is going to wire itself?  Who's choosing for the mind?  Obviously you know the answer to this..."you" are.  But what are "you?"

Your brain wires itself in response to the way in which you choose think and be.  Neuroplasticity then, I argue, is something that occurs when the meta-physical "you" interacts with your physical environment.  Intention is not something physical.  It is something beyond simple body awareness.  It is choosing how to be aware.  It requires someone directing behind the scenes so to speak.

To move forward in life you need to understand more deeply where you have come from.  In the same way we need to observe the crossroads between neuroplasticity and evolution so we can see more clearly how we participate in free will.  The evolutionary paradigm states that the human brain has developed reliable, specialized functions that help it navigate all aspects of living (Long, 1996).  Antonio Damasio, professor of neuroscience at USC, stated in his book The Feeling of What Happens that "the brain possesses several different, emotionally directed, problem-solving mechanisms that evolved from past interactions with ancestral environments."  But he goes on also to say that "the way we interact with our current environment continually influences neuronal development."

We may be tied to the past, but neuroplasticity shows us that we influence the evolution of our brain circuitry simply through our intention.  We will always feel the impulses of our unconscious as they register in the body in some way...this is the past, making itself present to you.  But neuroplasticity shows us that directed attention helps us change the strength of the impulses and deep seated feelings that arise from our past.  Doing so helps us create a life that is more present-moment centered, new, and, grounded in our untainted intentions.

Evidence for the Meta-Physical?

The idea that immaterial forces such as intention and awareness can shape the brain runs counter to the view that all of life is physical and that evolution is a series of random unfolding events.  Yet despite the plethora of new information the dominant paradigm of science still suggests that thoughts and actions are reducible to impersonal, microscopic, physical processes.  This paradigm of science cannot explain how brain activity gives rise to consciousness in a physical way, but that does not rule out that there is not a non-material reality.  It only supports the claim that a non-physical reality exists.

Neuroplasticity is proof that the meta-physical can actually interact with and subsequently change the physical reality.  The ability to influence brain circuitry changes through out our life span proves that there is a non-physical reality that underlays all of reality.

The Implications for Human Potential

It is not easy work to change brain circuitry.  The brain's circuitry cannot re-wire itself abruptly.  The brain's circuits have a structure that is weak enough to yield to influence, but strong enough not to yield all at once (Long, 2006).   Neuronal change is something that occurs over longer periods time with continual effort to choose a different way of being.  But regardless, the fact that this phenomena is possible shows us that human potential is essentially limitless.

It is amazing that our creative potential lays latent "within" the un-manifested neural circuits that may potentially come into existence.  Conscious awareness, the force within us that brings about life change, is also the same force that directs neuroplasticity.  It is under our conscious control to open up a new level of being for ourselves, but as I state to all of my clients, you must know what you are unconscious to if you are going overcome the control of your past...and as far as this post is concerned, the neuronal connections created through the ancestral past.

Before we can go more deeply into the personal and social implications of neuroplasticity we need to go deeper into the meta-physical realm.  Quantum physics, the topic of the next post, will show us deeper insights into reality in a way that the dominant paradigm has dismissed.

Life is Precious: A Humbling Experience 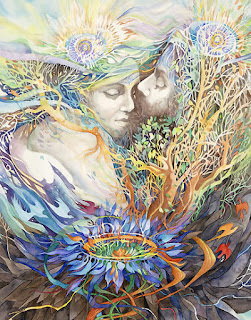 We often take for granted the relationships and privileges of our lives.  We often fail to see how precious life is.  And I, being as human as anyone else, has taken for granted the precious reality that is before me.  Yet, I was reminded this past week how this temporal existence can end abruptly at any time.

For the last 18 months I have shared my life with someone very dear to my heart.  For the last 5 months we have invested a tremendous amount of time, energy, and love into each other as we make our apartment together our home.  This woman is my teammate, my lover, and my best friend.  Yet, I was reminded last week just how precious this relationship really is.

We were at a concert last Friday night In San Francisco.  The atmosphere was fun, the people were spirited, and the music was great.  As my girlfriend stood beside me I realized how far we have come.  I thought to myself, wow, we have been through so much, we have helped each other grow so much, and here we are in what seemed to be the celebration of creating a home on the west coast.  Then about 30 minuets into the show I heard a scary thud just to my right.  My girlfriend had collapsed and lay on the floor unconscious with here eyes open.  She had fainted and as soon as she regained consciousness I got her to a quite spot and got her some water.  We went home shortly there after, but the image of her lying on the floor, unconscious, has stayed with me since that evening.

Days can go on and on without much change, but sooner or later everything that we have come to love will leave us.  In light of this fact we should choose to be aware that every moment, every day, and every experience we share with those whom we love is a gift.  In this realization we humbly realize how much we love our significant others, our families, and our friends.

As sobering as that thought can be it is important to realize this.  The fact that life is a temporary experience boldly hints to us to be humble and to not take for granted our blessed friendships, romances, families, and experiences.

For those of you who have lost someone very close to you and you morn their loss, remember, they still live on with you.  Morn them as you feel you should and realize that their love for you is what made you believe in yourself.  This is why you feel them in your heart.  Your acknowledgement of their temporary existence [as well as your own] is what enables you to not take for granted this precious life and to sincerely enjoy what it is that is around you.  This is a sense of deep gratefulness.

Gratefulness, as it seems, is the only key to true happiness.  Sometimes happiness is light, sometimes it is bittersweet, sometimes it is all about laughter, but true happiness comes about only from accepting the humbling realization that all moments and relationships are temporary.  But remember this feeling of gratefulness is not a thought.  It is a feeling you grow into.  We may hurt like hell before we feel this bittersweet peace, but we eventually move that way.  And when we do, when our emotional storms clear, we will feel a greater resonance with creation itself.  Death humbly teaches us how to be grateful for those who came into our lives as well as those who are currently in our lives.