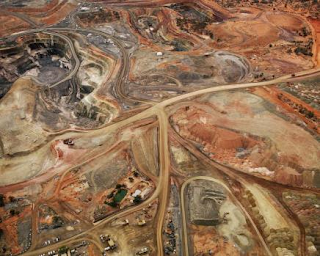 It seems that humanity is, ideologically speaking, operating within the same level of awareness that it has been for centuries, if not thousands of years.  I say this because humanity, in many fundamental ways, still condones the same ethics and principles that we have since the dawn of recorded history.  We still act like warriors and kings in search for the next frontier of wealth.  We hoard wealth for our respective kingdoms as we do not know what bounty the future will grant us.  The great tragedy, however, is that we are permissive of the consequences that our way of life fosters.

Like our ancestors we are still motivated by the acquisition of resources, ownership, and individual sovereignty.  Not that these goals are in and of themselves destructive, they are important goals in ensuring survival.   However, there is an underlying dogma within the dominant human paradigm that condones and justifies destructive behavior.  Ultimately, we perceive life as threating and as a society we act accordingly.  We develop governments, institutions, and mechanisms of law that uphold an unjust economic system.  Sadly, we  collectively condone this system, thus we debilitate the ability of society to evolve in the way that is necessary to sustain its long term survival on this planet.

The fear of survival is real.  It is natural to fear pain, starvation, and the cold.  But our fear has gotten the worst of us and we have all taking part in an economic race to the bottom.   This "rat race" has caused modern "Kingdoms" to acquire wealth at the expense of long term ecological viability and long term human sustainability.  More importantly, subverting to this way of life has made people feel a sense of helplessness.  We have humanized this sense of helplessness to such a great extent that it has become a fact of life.  The key, I feel in all of this, is that to some degree, we subvert our autonomy to centralized authority.  That authority can be government, the principles of capitalism, religion.  It can be anything that we submit our power to decide to.  We continue to justify our destructive ways of life by placing spiritual and emotional authority outside of ourselves.  We sustain our religious and psychological institutionalized helplessness.  Thus we believe we have lost the ability to consciously create harmony on this planet.

We limit ourselves and relegate ourselves to actions that are dictated by our fears.  Thus we lose sight of what we truly are... a unified species living upon a physically limited Earth.  We have a mission to sustain life and experience our magnificence within the cosmos...  Yet we instead perpetuate a way of life that has us pinned up against on another in a race to the bottom of finite resource acquisition and ethical dominance over groups of people who, by design, have perpetually less.

Just as kings sought to expand their kingdoms, just as servants of kings and warriors sought to expand their wealth, so to do we to seek to control wealth and power to secure life for ourselves and our families.  Do not get me wrong...This is a respectful declaration to life.  It takes courageous effort to ensure the survival of the dependents we love so much.  This speaks of gratitude to the lives we have been granted, but when our actions, however beneficial to sustaining life as we know it, divide people to race for limited resources we live by an ethic that will eventually consume the Earth of its bounty and leave future generations without what we have been working for our entire lives... The security to live, the power to control, and the ability to live in peace.  So in that sense we are still living like the ancients.  Albeit, capitalism has created opportunity for not only the kings and queens to be wealthy land owners, it has still led us fighting among each other for wealth without consideration for our actions on local and global scales.  We may not fight with swords anymore, but we still fight and we do so feeling helpless and subsequently apathetic to the consequences of our way of life.

The development and implementation of technology has been societies biggest achievement.  It had aided us to live 7 billion proud on this planet floating in the cosmos.  This population explosion would have been impossible without advancements in medicine, agriculture, industry, etc.  However, only a relatively few dictate the use and implementation of current technological advancements as well as future technological implementations.  Centralized authority, the kings and queens of our day, have intentionally set these limitations, for it is their control of technology that grants and sustains their power.

For example, think of how we, especially in the United States, use our taxed wealth.  Over 50% of tax money is used to sustain the military.  Many researchers estimate that it would cost 30 billion dollars to eradicate world hunger, however the world spends that on military endeavors in 8 days!  We also use our tax money to subsidize and aid the biggest oil and gas companies.  With record profits most years, why should we continue to aid companies like exxon-mobil?  Shouldn't we instead use our hard earned tax base to supplement projects that would eventually end our dependence on fossil fuels, which would by consequence help alleviate "our need" to be at war with each other?  We all know that our way of life is rapidly destroying our planet.  We are currently in the middle of the biggest mass extinction event Earth has seen in hundreds of thousands, if not millions of years.  But its no secret as to why we do not see change happening at the rate we need.  It is because those who hoard power and wealth depend on these current economic and political systems to ensure their kingdoms stay in tact.  But for how much longer can we stay apathetic to the facts?

What sustains the power of the current ruling class is our apathy and sense of helplessness.  In our helplessness we feel like their is no way of changing anything.  So then in a moment of defeat and complacency we tell ourselves, why should I not secure my "piece of the pie" if someone else is going to take it?  And I like you, try to do what I can to ensure that my family is well feed and secure.  But for how much longer can we condone a way of life that is clearly detrimental to life on Earth?  Scientific analysis is showing us that we are in great peril.  To some, these discoveries fuel their apathy and fear based way of life.  "I will be dead when that happens," "I need to secure what is mine to ensure my survival while I can," and so on....  We can all empathize with this, because we all fear our own suffering.  What is more noble than protecting our precious lives and taking care of those who depend on us?  But what we fail to see is that unless humanity undergoes a rapid paradigm shift we will self destruct.  The realization of humanity becoming united in mind, body, and spirit, I believe, is the only way forward,

A great psychosis has developed.  Our young have become increasingly ADD as society over stimulates their developing minds.  Adults grow more apathetic, schizoaffective, and narcissistic, in light of what everyone see's... A hopeless future and a dying planet.  We have come to identify so much with this sense of isolation and individuality that we have become so lost in our minds - our seemingly last refuge from our pain (Ironic I know).  Thus we continue and perpetuate duality and fail to see our true nature... that we are inherently unified and that our survival depends on this.

Our society is on the verge of becoming a product of our technology and our ideologies - and when a society becomes a product of its technology and ideologies it becomes impossible to consciously evolve and sustain itself in a manor that is in line with nature.  We submit our power to technology and to the elite that controls the implementation of these technologies to their benefit.  This is a sum zero game a far as the evolution of society is concerned.

I am about to say something that most of the world would think is blasphemous.  You are God.  It is we who are here to create reality.  God herself has profoundly bestowed upon us the ability to create in her likeness.  God is the entirety of the cosmos and the infinite that holds it all together.  We are the the entirety of God, but we are certainly "a part" of that...not "apart" from that.  Dogma keeps much of the world enslaved to limiting belief.  Not only have we let the elite and technology control us, but so to have we been controlled by religion.  Whether it is our religion or their religion we justify our divisiveness and condone brutality.  Ironically, it is religion that keeps us further from God, that is unless that "religion" speaks of the divine nature of unification.  The truly religious person seeks unity and is not bound by dogma.  It is the institutionalized religious person that submits their autonomy and depends on a doctrine to help them decide the rights and wrongs of life.  But the ultimate "right way" is something that can only be decided upon from insights that come from within.  To see that we are unified is not a vision that comes from mind, but it is a vision born from the heart.  What nature begets of us now is that we seek answers from deep within... as compassion arises from the deep well of understanding our true nature... That we are ONE.

The only way to secure the future is to be the solution.  We cannot wait for some outside authority.  We instead need to realize that true authority comes from the voice within.  And it is this voice from within that fosters altruism, empathy, and the vision of collective survival.  Our most primitive emotions within the spectrum of love knows that we are nature, that God is nature, and that the laws of nature clearly show that if we do not act as one unified race the wealth of the remaining kingdoms will be rendered worthless.  So then I ask all of us... Can you see that I am your brother?  Can you realize that the stranger is your family?  Or will we let fear keep the illusion of division alive?  The choice is ours... and the consequences of either action will be our reward.